Slip rings for coaxial transmission including power, data and signals

Compact slip rings with up to 4 coaxial lines

All details about our slip rings clearly arranged in the catalogue

Request the CAD drawing of the slip ring easily

Coax slip rings (or COAX) for signalling and more. The coaxial cable gets its name from its structure. Instead of a strand of bundled wires, the current-carrying paths in a coaxial cable lie inside each other. The concentric, onion-shaped cross-section is called coaxial because two cable axes are built into each other. The outer cable axis consists of a stainless steel or copper braiding. This keeps the coaxial cable very pliable and flexible. The inner cable, which is positioned exactly in the centre, is a conventional, monolithic copper cable.

Between the two current-carrying lines there is a dielectric as an insulating protective layer. It prevents short circuits between the lines. Suitable hoses made of soft plastic or rubber are used for this purpose. From the outside, the cable is usually particularly well protected against moisture penetration. This is also necessary because of the thin copper wires of the outer cable, as they would otherwise quickly rust.

The coaxial cable has proven itself above all in signalling technology. It has good self-shielding properties and is insensitive to interference signals. Above all, it is suitable for transmitting signals over a long distance with almost no interference. In the household, the coaxial cable is therefore known as the connection cable between a satellite system and the television. In industry, the coaxial cable plays an important role, especially in automation and data transmission technology. It is usually located between the interfaces of radio receivers and transmitters and a sensor or actuator that is to be moved by wireless signal. Here there is often a need for rotary joints. The coaxial slip ring was developed so that the transmission capability of the coaxial cable is not reduced even with rotary joints. 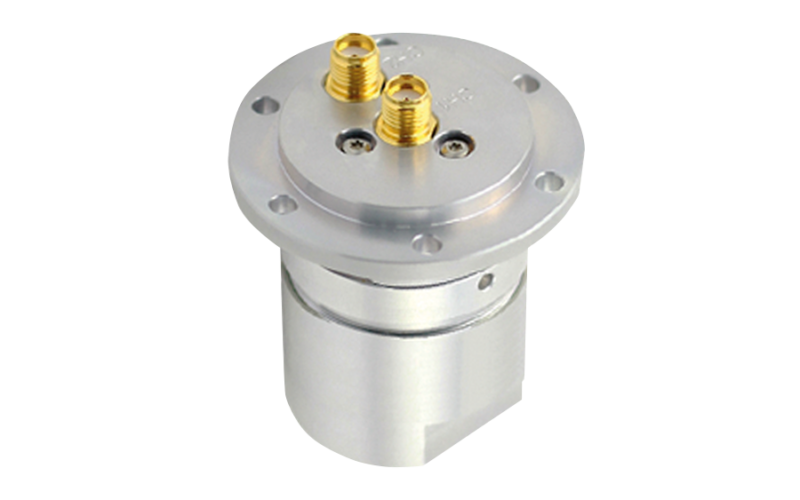 To allow quick installation in the end device, we deliver our coax slip rings with SMA or N connectors as standard. If you need other connectors or special cables, we can of course also implement this. Please do not hesitate to contact us.

The integration of coax slip rings can be very individual. We are able to realize customized flange solutions with individual hole patterns.

Different housing materials to choose from

The housing material of coax slip rings is selected after consultation with our customers. From plastic to stainless steel, many possibilities, including combinations, are available. We would be pleased to advise you on the various possibilities in this area.

Individual modification of the housing shape

To fix the stator side of coax slip rings, we provide a torque arm as standard, which can be screwed to the housing. In this case, we have incorporated an individual flattening in the housing to provide the customer with a different type of positive connection. We would be happy to advise you on the various possibilities in this area.

Our coaxial slip rings have the following advantages for you:

The housing is shielded against active and passive radio interference. This is particularly important for coax slip rings, as this type of cable is mainly used for signal transmission. The standard coax slip ring can be rotated up to 150 revolutions per minute. The large selection also has the right coax slip ring for your application. With protection class IP51, the slip ring is insensitive to penetrating dust and splash water. This protection class is sufficient for most applications. If your applications require higher protection, please contact us. We will also find the right coaxial slip ring for your challenges.

We can offer you coax slip rings with one to four coax feedthroughs. In total, a coax slip ring has up to 72 feedthroughs. Each ring has a maximum through voltage of 440 volts, regardless of whether it is direct or alternating current. This means that you still have a small reserve for the maximum dielectric strength of 500 volts. The coaxial slip ring keeps the electrical noise to a maximum of 10 milliohms. The insulation resistance or dielectric strength is designed for 1000 megohms at 500 volts DC.

Without customer specifications, we deliver the coax slip rings with incoming and outgoing cables in a length of 300 mm. Other lengths can be produced at any time. With a working temperature of -30 °C to +80 °C, the coax slip ring can also be used in extreme environments. If you have any special requirements for your coax slip rings, please let us know.

The installation of the coax slip rings is easy. They are simply screwed to a solid base with the lug and connected to the cables. Ideal for their attachment are fits that are easy to make yourself. To avoid confusion, all incoming and outgoing cables have the same colour pattern. If the coax slip ring is mounted on the stator side on a rotating component, for example a hollow shaft, you should ensure that it is positioned exactly in the centre. In this way you avoid undesirable twisting.

Use of the coaxial slip rings

Coax slip rings are used to reliably transmit high-energy radio signals, which are common in coax cables. This limits their rotational speed. Higher speeds would provoke spark jumps in the slip ring, which then lead to interference signals. Most applications of coax slip rings are therefore very slow and also do not use the entire angle of rotation. Typical applications for the coax slip ring are as follows:

Repair of the coaxial slip rings

How to get your coaxial slip rings

Our wide product range has the right coaxial slip ring for most applications. However, if you have special requirements, please contact us. We will find the ideal solution for your challenge in a joint discussion. We look forward to your call!

The different rotarX slip ring series are optimised for a wide range of applications. We support our customers for customised solutions.
TO OUR APPLICATIONS

Product catalogue for all slip rings

Find out about the different slip rings in our current overview. Transmission technology for complex industrial and safety-relevant applications form the core of our product range. All products can be individually adapted to the applications in order to offer you added value. Premium engineering - that is our claim for every single product we manufacture. We would like to convince you of this.

Do you have questions or would you like advice?

We will be happy to answer any questions and look forward to hearing from you.

WE LOOK FORWARD TO YOUR MESSAGE